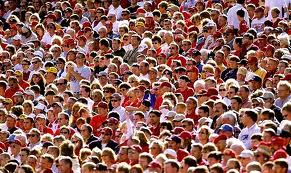 My importance is only perspective. When I think that I am the center of the universe (or you do), it is only because of where our attention is focused. If I stare at a dot on a paper the surrounding white space shifts so that my concentration is on the spot.
If I focus on the negative impacts that I see from the actions of a world leader, it becomes my topic of discussion, where I spend intellectual and kinetic energy and impacts my mood. Where I place my attention nudges my ideation and action. If I am trying to find a poverty reduction strategy and it is my focus then I miss any opportunity that a prosperity creation strategy could add. If I wring my hands about the news regarding the Paris Climate Accord and the discord around the decision, I might miss the lessons that can be learned from new collaborations and strategies.
Focus is important when undertaking tasks like scuba diving, rock climbing or hang-gliding (life and death in the balance) but only seeing my nose or navel in more complex circumstances leads to missed opportunities.

B
Tomorrow; You do have a religion/philosophy even if you can’t name it

Positive or negative, it is your choice. Inside our head, we have the opportunity to change the script. Once edited, the new dialogue will facilitate a re-framing. The process of shifting the focus from negative to positive requires some small changes in behaviour. Geoffrey James posted 57 small changes on Muse. It is definitely worth a read but here are my favourite five.

4. Begin Each Day with Expectation – I try to focus on my preferred future before my feet it the floor at 5am. On the days I resist jumping into the day and staying for a moment to dwell in the possibilities, I find solace.

9. Define “Failure” as “Failing to Take Action” – my serious action bias loves this one. The only wrong thing to do is nothing.

17. Drink More Water – Like most westerners I don’t do a good job of ensuring that I stay hydrated. My body can scream and I can still ignore it so this is my number one small thing to work on.

31. Never Attend Agenda-less Meetings – my biggest pet peeve (after drivers who can’t merge) is wasting my time and that of others sitting in a circle as a way of justifying employment. Set the agenda, stick with the agenda and honour the decisions arising.

55. Work 40 Hours a Week (or Less) – This one I am beginning to master. after years of 70 hour weeks, I am usually heading home as my energy and productivity fades at about 3:30

If I knew then what I know now (or think I know) I would have done some things differently (maybe). This isn’t regrets (I have a few, but then again too few to mention). This is about offering encouragement to readers in the 30’s, 40’s and 50’s to take action to change your world earlier than I undertook. If you have personal goals for a distant future, don’t put off starting until a later date (usually when I have more time, have more money, have more energy, experience..) Excuses are poor reasons to not begin.

I am healthier today than 10 years ago, I am smarter today than 10 years ago and 10 minutes ago I have stronger relationships than yesterday and last century. I wasn’t intentional about these changes until the last 6 years. Every day my intentions rule my actions and inactions. Every day I have the choice to do things or not do things that make my life, my family, my world better. I am better intentionally recognizing the choices and imagining the impact.

If I knew then … I would have set significant long term goals and then putting in place 10 day landmarks, 100 day navigation points and 1000 day destinations for as many longer term aspirations as possible. The higher level discipline of intention and accountability towards something important (to you) will reap remarkable benefits when you are a decade older and another decade older …

To say that the original “One Minute Manager” is a timeless classic seems silly but it has been one of the most read business books of the last thirty years.  13 Million sold and published in 37 languages speaks to the popularity and importance of this short work. So when IO received a notice from Becky Robinson – Weaving Influence  that a new version was launching very soon (next week) I started thinking about where I was twenty years ago and how the book (among a few) helped shape me.  To be honest, I hadn’t thought about one minute goals, one minute praises or one minute feedback, at least not consciously, for years.

Twenty years ago, I was doing a job, going to work every day, getting the job done – barely. I remember having an attitude of complacency and getting by. I didn’t feel the day-to-day was meaningful. Work to live. Blanchard was one of a few authors I read that changed by my attitude along with a practical approach to making the day-to-day productive and fun. It was a stress reducing, meaning making tool that I put away on a bookshelf.

I am anxious to get New One Minute Manager ;  the new version for the new times where there seems to be so many distractions, pressures, and so many fewer person to person opportunities.

Make Today Remarkable, by praising someone,

Belief is a choice, like trust and bravery. Trust and belief are choices, once made become invisible. If you make the choice to not believe, it is always the lens you view the world through.

The 1930s saw Ripley expand his presence into other media. In 1930, he began a fourteen-year run on radio. Ripley recorded live radio shows from underwater, the sky, caves, snake pits, and foreign countries. The next year he hosted the first of a series of two dozen Believe It or Not! theatrical short films. In 1932, Ripley opened his first museum, the Odditorium, in Chicago in 1933. The concept was a success, and at one point there were Odditoriums in San Diego, Dallas, Cleveland, San Francisco, and New York City. By this point in his life, Ripley had been voted the most popular man in America. He asked millions worldwide to believe or not – make a choice. 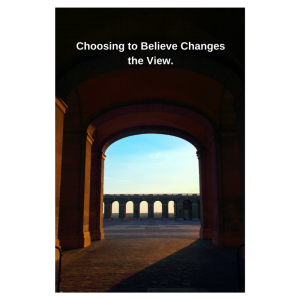 Once you choose to believe – 2+2=4, Man landed on the moon, Jesus is the risen Lord, your partner loves you … all forms of opportunity presents itself because of the lens you are viewing. Some choices are or we think are empirical like the earth is round and we can use ‘evidence’ to analyse and decide. Some are philosophical like helping the poor is laudable and we opt for the one that fits with existing values. In love emotions can be the measure that tips the believe scale. Loyalty, faith, experience and intuition contribute in varying measure to the choice, depending on the circumstance and occasion.

Regardless of how the choice is made, once made a new viewpoint opens and we see this world with brightness.

This choice, like all our choices can be reversed or altered, for an equal number of combinations of reasons. Today, choose to believe that you are loved (you really are). Fake it if you must. In every situation today make the choice to believe that you are admired, accepted and adored. How does this one choice change your day? How would making a habit of believing change your life? 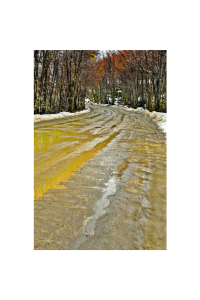 I was writing to congratulate a friend about a momentous change they just made in their career and was encouraging him to be excited by the journey. (A lesson I am constantly trying to learn and incorporate). Both of us, like many I know, are destination oriented. As I was typing (pecking really) I misspelled traveled (or spell check did) and it became gravelled. When I reread the sentence it sound more appropriate.

For the true urbanites, the Free Dictionary defines gravelled as; To apply a surface of rock fragments or pebbles or stones to a road. Gravel gives you traction on the road, especially in dangerous or difficult conditions. It allows you to think about something other than the road you are travelling because it keeps you between the  ditches and on the straight and narrow.

Maybe a little less gravel and a little more attention would help us focus on the present; the journey and appreciate how we are getting there rather than just on arriving.

I have a 3000 km drive next week and when I get back to Calgary a headlong rush to complete 4 projects before the end of April.  Maybe the lesson applies to both.

Pioneered and developed by Marilyn Atkinson, PhD, Solution-Focused Coaching is an advanced coaching model that integrates the profession of coaching with a highly developed body of personal growth technologies. Developed over the past 30 years, it provides a comprehensive approach that assists individuals, managers and teams to take action in alignment with their highest individual and corporate vision. Solution Focused personal or business coach, does what a good sports coach, an acting trainer, or a writing teacher does, but with systemic clarity of focus. A Remarkable Coach, will challenge you and help to clarify what you want, and takes the time to find out what winning in life means to you. A Remarkable Coach is a partner in first clarifying your vision and the steps to get there, and then inspiring you to your next level of personal excellence. Through coaching you can discover the life you know as deepest aim; a life of development and accomplishment, both personally and professionally.

A coach will encourage, prompt, provoke and sponsor you towards the ownership of skill-sets that encourage and support your increased creativity, productiveness and effectiveness.

We all face doubts, barriers, personal scripts that slow or even halt our progress. People with high aspirations, move past these ‘gremlins’ through simply partnering with a Remarkable Coach.  Athletes, high achievers, musicians, writers, skilled actors know they get best results with a coach who can help them review aims, set directions, clarify and specify steps.  Their attention can then become relaxed around their ultimate direction towards excellence.  When they commit themselves to work with a personal coach they learn how to focus on their long-range ability sets. A serious performer or serious player in the realm of competitive sports or music would not expect to progress very far without a strong alliance with a good coach.

Contact bob@remarkablepeople.ca for information on a complementary one hour skype coaching session.